A Ride to Remote Reality

Posted by admin on December 11, 2012 | Featured | No Comments
So far I’ve only had the chance to read blogs written by others. This is going to be my maiden blog of my maiden field tour. This was not only a wonderful and educative exposure, but also had a lot to offer in terms of beautiful sights and surprise encounters.
I learnt 2 weeks in advance that I would have to spend a month in Andhra Pradesh, conducting a small pilot study. I was very thrilled, mainly because I finally had an opportunity to go to the field, to work at grass root level and acquire new management skills but also because I would get to tour AP, which is famous for its scenic beauty. When I set off for the tour, I had a volley of thoughts grappling inside me, an unusual feeling mixing fear of the unknown and latent excitement about the outing.
I would like to share some stories with you from my experiences to show that sometimes, even on the field one can mix work and pleasure!! 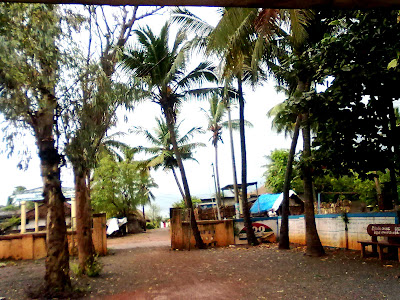 Photo: A village in Andhra Pradesh
Travel Tales:
My bus rides to the villages in Andhra Pradesh were fascinating, mainly because they’re so revealing of the culture of the place, and highly enjoyable as well, as festival time had put everybody in a celebratory mood, elated and excited for the holidays to come. Every time the bus halted in some village, passengers boarding the bus would present themselves in a very unique manner, by the way they dressed, by their activities: It was easy to distinguish working women, college and school going students, or families going home.Fiesta mood was in full bloom and showed on the faces of people buying new gifts for festivals, or tribal women all dressed up in their traditional costumes going to meet relatives for the festivals. I know of no better game for a foreigner like me than to try and differentiate the kind of village they are from: Whether it’s a village where the sources of income are limited, a village where options are open and work easily available, or again the nearest city sending its migrant workers back to their home villages.
The Nature, that has so many things to share and give: 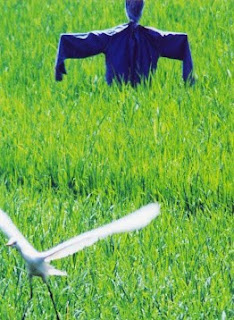 Photo: Cattle Egret
I have often heard that paddy fields were exquisite, beautiful… and that turned out to be so true! Everywhere it was lush green rice fields with coconut trees on the sides of the roads, early morning breeze, Cattle Egrets foraging on rice fields, and scarecrows supervising the whole scene. A scarecrow stood in the middle of a field, set off by the paddy crop, dressed up  to accomplice his task. I am not sure that helped the farmer much though: I was peering through the lens, waiting for a Cattle Egret to move into the frame. But before the shutter landed, the Egret had set off with its food. That scarecrow was way too kind to someone picking off from under his nose!
Learning new things:
I was very excited to go to Krishna district in Andhra Pradesh; one of the reasons being that fisheries were the key occupation in one of the mandals where we were set to work. In one of the villages, apart from the fish ponds, I saw this huge machine that goes till the middle of the pond along with a generator.  I was curious to learn what it was, until a passer-by enlighted us:  What you see is a Pond Aerator that provides oxygen to the fish. Water aeration is the process of increasing the oxygen saturation of the water. This is often required to maintain the integrity of water bodies affected by near-by human activities like sewage discharges, agricultural-run off or over-baiting of a fishing lake. I always thought fishery would be one of the easiest jobs to have among all farming occupations. I thought one just needed to let the fish grow and then just throw the net when he wanted to catch some of them… But in reality it was nothing similar to what I assumed, and much harder in fact! 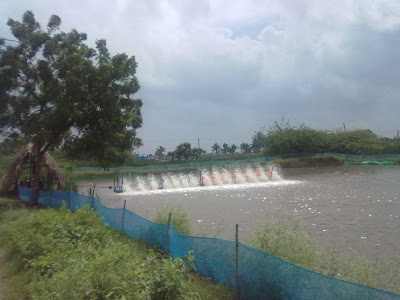 Photo: Cycle repair shop in one of the villages.
People of countryside:
After going to various villages, meeting people from different backgrounds, observing the  issues they face on a daily basis, you could be surprised, but they are still happy in their own way and making the most of their situation. But the most remarkable thing about them is without a doubt the warmth they show when they welcome you. Let me give you two examples: For the needs of my project, we visited each village two days in a row. On day 1 we would have individual interviews and on day 2 focus group discussions. In one of the villages, after the individual interview was over, the respondent’s husband offered to pick us up next day at the lodge where we were staying and drive us back once we’d be done. And he meant it: He took the pain to drive 14 kms for us, without asking anything in return.
On some other day, we were waiting for a vehicle to take us back to our guesthouse after completing that day’s surveys. It was a hot and sunny day and seemed impossible to find any store to buy water from; we did however stumble upon a small shop selling cold drinks. We sat down in the old man’s shop and got curious again: My surveyors started asking a whole lot of questions: Where did is vegetables come from? How did he know the prices?…  but when the shop keeper came to know that I didn’t know the language, then he suddenly started answering me in some sign language – the only true international language! He introduced us to his son, a post-graduate student, with great pride. In the 5 minutes that we spent together, he felt so close to us that he offered us to have lunch with them. It was indeed a very touching incident for all of us.
I had until now heard and enjoyed many field stories from others; but it was an amazing and eye opening experience to go to field and see for myself; I had a very educative time and will keep treasuring many unforgettable memories, and moments that taught me many new things that I would probably never have learnt sitting at my office desk. By looking around, I felt that still there are so many things to be done for these people. They can also have a life that is more secure, and I am very sure that we, at CMF, can make a difference for the poor of our country, should it be only by providing them access to services and help in managing their finances.