2015: The year of Digital and Financial Inclusion in India? 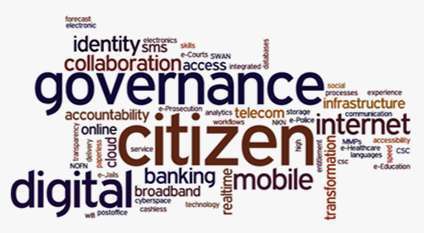 Posted by admin on October 30, 2015 | Featured | No Comments
2015 is set to be a watershed year for the growth and deepening of banking and financial services in India. The Reserve Bank of India and the Union Government, have accorded policy priority to ‘Financial Inclusion’ through an array of regulatory and policy reforms starting with the Jan Dhan and Jan Suraksha Yojanas, the launch of refinance agency MUDRA, and the entry of differentiated banks into the financial ecosystem. These developments reflect a renewed commitment towards reaching India’s unbanked and unfunded sections of society and signal a paradigm shift towards a more innovative, technology-enabled approach in addressing last-mile delivery problems.  Another noteworthy development this year has been the Union Government’s flagship ‘Digital India’ initiative [1], which seeks to transform India into a digitally empowered knowledge economy. While Digital India’s (DI) launch has created quite a buzz in India and abroad, digitization in its broadest sense is a relatively unexplored area for both policymakers and practitioners in the country. The success of DI rests on the shoulders of two key ingredients:  universal access to high-speed mobile and broadband infrastructure. The emergence of ‘Digital Financial Services’ in India ties these developments in the digital and financial spaces together, and represents a dynamic period of disruption and innovation for the industry.

Taking stock of ‘Digital India’
There is little doubt that technology is the next frontier for banking and financial services in India, and the focus has now shifted from the ‘if’ and ‘when’, to the ‘how’ of digital financial services (DFS).   While there is enormous potential for the integration of technology and digital systems into the financial services sector, the numbers on key enablers such as mobile internet and broadband penetration paint a sobering picture. A 2014 report by McKinsey Global Institute speaks of five disruptive technologies that can improve productivity and efficiency across key sectors of the economy, by ‘digitising life and work’. [2] These include mobile internet, cloud technology, automation of knowledge, digital payments and verifiable digital identity. The current estimates of penetration of these technologies and projections for 2025 as per the report are: 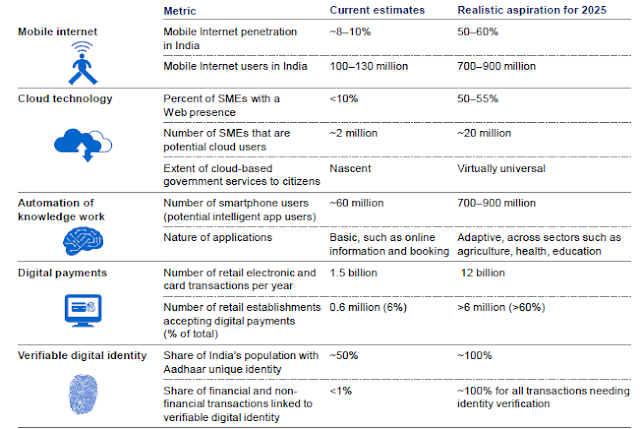 As is evident from the above projections, there is immense untapped potential in India in the mobile internet penetration and digitisation space, for individuals as well as Small and Micro enterprises (SMEs). Statistics from other sources tell a similar story. A recent UNESCO report, ‘The State of Broadband 2015’ [3], ranked India 131 out of 189 countries on broadband penetration (fixed broadband subscriptions per 100 capita) in 2014. On mobile broadband subscriptions per 100 capita, India stood at 155 in 2014, far below neighbouring countries Sri Lanka and Nepal, which were ranked 126 and 115, respectively. In an interesting study conducted by Booz&Co. in 2012 [4], researchers used a broad-based metric for measuring a country’s level of Digitization. They used a metric based on a group of proxy indicators on the demand and supply side, and classified them under the following six attributes:

Reliability — the quality and consistency of available digital services

Based on this matrix, India falls in the category of ‘constrained economies’ (with a score of 25). All three sets of data indicate that India is still a long way from bridging the so-called ‘digital divide’; the gap between demographics and regions that have access to information and communications technology, and those that have limited or no access. This challenge, however, represents an enormous investment opportunity to service providers
and government institutions such as India Post. With mobile network operators and Technology facilitators having received licenses from the Reserve Bank of India to operate as ‘Payments Banks’, and the strengthening of strategic partnerships between the Government of India and global technology giants such as Google and Microsoft, investments in expanding last-mile Information & Communication Technology and Telecom are likely to follow suite. In addition to financial institutions and mobile network operators, the Financial Technology space is thriving with companies such as PayTm, Oxigen, Itzcash, Fino PayTech that offer prepaid payment solutions. With the facilitation of such an enabling business and regulatory environment in India, one can hope that supply-side constraints will not be a major concern in the near future.

Push vs Pull of Digital Finance

There is little doubt that low-income consumers, especially in areas with limited access are likely to benefit from more accessible and affordable financial services. Given that 85% of India’s population has access to a mobile phone (their own or someone else’s) and only 0.3% have used  mobile money services [5], there is tremendous scope for expansion in this segment. However, how easy is the transition from cash to mobile money and what factors will enable customers from low-income backgrounds to make this transition smoothly? Will the increasing competition in the sector ultimately benefit the consumers at the grassroots without compromising on their interests and protection? While it is too early to comment on these developments at this point, it is important to observe and track their progress closely. According to a recent CGAP study, complex user interfaces, consumer fraud, lack of recourse for fraud victims and lack of transparency in fees and other terms of service, are key risk factors for consumers in adopting digital financial services. [6] Thus, in this case, supply is unlikely to create its own demand. As highlighted by the Booz&Co. matrix in the previous section, the shift towards a less cash society will need a re-alignment of digital processes and operations with demand-side considerations such as usability, trust in service providers and consumer behaviour.

As India hops onto the Digital Finance bandwagon along with the rest of the developing world, it will be sobering to identify key drivers and barriers to the expansion of DFS, especially on the demand side.