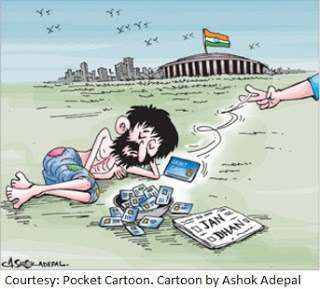 Posted by admin on January 27, 2016 | Featured | No Comments
On 28th August 2014, the Indian government launched Pradhan Mantri Jan Dhan Yojana (PMJDY), yet another flagship project with an aim to ensure affordable financial services and complete financial inclusion. Under the programme each account holder is covered by life insurance worth Rs. 30,000, accident insurance worth Rs.1,00,000, provided a RuPay debit card and allowed an overdraw up to Rs. 5,000.
Much like all the other campaigns, the aggressively marketed Jan Dhan Yojana made headlines and also created a Guinness Book of World Record for 18,096,130 bank accounts opened under the program within a week. But the scheme that showed promise is also receiving flak for being an ineffectual instrument of financial inclusion.Jan Dhan – Hitting the target, missing the pointCongratulations are in order for opening these, albeit empty, no-frills accounts – one amongst many reasons that made the first 100 days of Modi government look very good. But sustaining this streak of success needs far more than just numbers –and this is where the scheme maybe a little myopic.Cost to banks
The first big miss is the impact the scheme has on banks and their profitability. With the government’s mandate in place, banks are now obligated to open branches in remote locations that are not viable for their business. Just the rollout of Jan Dhan has cost banks INR 2,000 crores in capex. Add to this the RuPay card costs of INR 20 each amongst other costs and the burden on the bank becomes obvious. Additionally, transaction costs associated with lending and loan collection is also something the banks must bear the brunt of.

The unused and duplicate accounts
The government set a rather ambitious target for banks to open 7.5 crore accounts by January 2015 while RBI relaxed KYC norms to facilitate the process. The result was duplication of accounts and banks flouting KYC requirements as forewarned by RBI. As of January this year RBI has reported 30 percent of the accounts opened under Jan Dhan Yojana as duplicate.

Yet another concern is of unused accounts that continue to have zero balance. This was to be addressed by linking direct benefit transfers (DBTs) to these accounts and to some extent this strategy has been successful. But now the concern is of identifying and segregating duplicate accounts to ensure the transfers reach the right beneficiaries – failing which, the scheme will only continue to plunder state coffers.Inconvenience to the userVarious independent studies indicate the banks’ unwillingness and perhaps inability to roll out the scheme effectively. An audit study in urban South India by Amy Mowl and Camille Boudot found that banks can, and do influence the extent of financial inclusion, even if schemes are made mandatory. Not only have banks been known to turn away customers asking for specific schemes but they also refuse to accept valid ID proofs and choose not to market the benefits of low cost accounts.Should by any chance the ‘unbanked’ have
managed to open an account after all of this, as first-time users, they must now learn how to use a plastic device (read ‘debit card’) to actually gain access to their own money!Bundling overdraft facilities, insurance and other direct benefit transfers (DBT) linked to the accounts were essentially introduced to make the scheme more lucrative. However, with limited information and knowledge, accounts continue to lie dormant. These dormant accounts are grounds for disqualification, to avail insurance cover, as well as overdraft facility. So whose purpose are these accounts serving?

Well, is the glass at least half full?

It goes without saying that Jan Dhan’s agenda of bringing the unbanked under the ambit of a formal banking environment has definitely led to an increase in the total number of bank accounts. As of September last year, nearly 77 percent of the accounts were running on zero balance; a number which has significantly dropped down to 37 percent as of 11 November 2015.

This is predominantly because of the LPG subsidy rollout which comes under the purview of DBT. Soon, other subsidies such as food and fertilisers shall also be linked to these accounts making them more meaningful to users and perhaps easing some of the financial burden the banks currently face.Currently, there are on-going efforts to put a system in place that can engage, monitor and sustain this initiative. A pilot study in Rajasthan, in collaboration with a mobile phone company, has found some promising results. SHG members in three blocks i.e Banswara, Jodhpur and Jaisalmer have been able to deposit money from mobile phone to SHG accounts. 1,346 SHGs have been enrolled till date through the pilot and Rs 46 lakh has been transacted.Can the momentum of the initiative be maintained? Can the drawbacks be catered to and the benefits amplified? Only time can tell, but until then, a glass half-full is still worth achieving.
Conclusion
The PMJDY is certainly a viable scheme to improve financial inclusion. But pull away the financial schemes linked to it, and the accounts risk becoming dormant again. With the existing trust deficit, shouldn’t the government focus on financial literacy along with financial inclusion?
This is a reality the Government seems to have finally woken up to. A recent PMO statement stated, “The Prime Minister directed that awareness campaigns be launched, especially through the medium of mobile phones, to educate people about the benefits available to them through the Jan Dhan Accounts.”
In light of the same, the finance ministry has roped in Industrial Training Institutes (ITIs) and skilling centres to run short term financial literacy courses linked to branches that offer Jan Dhan Yojana accounts. If we continue to set systems in place, the long-term benefits of Jan Dhan accounts will unquestionably offset the present concerns over dorma
nt accounts.They say the Jan Dhan Yojana is nothing but old wine in a new bottle – a mere spin on UPA’s Swabhimaan Yojana. But if Mr. Modi can get the PMJDY right, not many would care about the bottle. After all, old wine is a cherished thing.