Posted by admin on July 5, 2013 | Featured | No Comments
Growth is the most pressing issue in a system, so much so, that growth has become synonymous with success. Higher are the growth figures bigger are the smiles that they incite, and so it should be, because growing is nothing but expanding one’s capacity. It is in this light that we look at ‘capacity building’ as the fundamental agenda in every system.  However this idealistic agenda has a very dismal realization; capacity building remains a hypothetical idea which has not seen much practical manifestation and even if it has, the effects have not been sustainable and equitable at the same time. This unbalanced frame encompassing non-sustainable and inequitable  growth is the reason why figures or quantitative measures are not enough to assert that all population members have really expanded their capacity, that each one of them leads a better life, has better access to amenities and that each individual is better off. It is in this scenario that the concept of livelihood comes in.
Livelihood, as an isolated term, is nothing but the means of securing basic necessities of life, namely, food, water, shelter and clothing. Any activity which helps an individual to secure his basic needs for life is that individual’s livelihood. For example, if a person catches fish and sells them to earn money which in turn is used to procure food, shelter and clothing, then fishing is the individual’s livelihood. Looking at the term superficially, one can say that livelihood is an economic activity performed by a person and this is the general form in which the word is usually used. 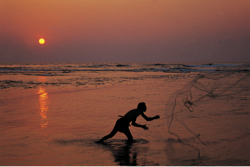 But there is more to livelihood than just eating, living and protecting oneself. After all the term does consist of “live” and “to live” is not the same as “to survive”. A person may catch fish but if he is not able to sell it then he cannot “live” from this activity. He might survive with what he has in his reach but that is his neural network forcing him to survive. In order to live he must derive the satisfaction from the activity and a fisherman can derive this satisfaction only when he gets a reasonable price for the fish he has caught. Thus livelihood also means an individual’s access to opportunity.
Now, considering an individual to be aloof of the other population members around him would be an act of negligence because social conditions are as important a factor in determining an individual’s livelihood as is his skill set. A detailed analysis will show that society plays a much greater role in a person’s livelihood and hence it becomes imperative to include social groups in our definition of the same. This is the shared core idea of social capital “that social networks have value”. We thus define livelihood as “the command an individual, family, or other social group has over an income and/or bundles of resources that can be used or exchanged to satisfy its needs. This may involve information, cultural knowledge, social networks and legal rights as well as tools, land and other physical resources.” It is interesting to see how the change of perspective has made the concept detailed but approachable at the same time. It has brought terms like social group, resource bundle, information, cultural knowledge, social networks and legal rights, to the drawing board. The conglomeration of these gives us various starting points to observe, analyse and attack the issues pertaining to livelihood.
In this new outlook, we no longer need to look into the issues pertaining to each individual but rather we group them based on certain criteria and observe the characteristic features of this group. Each group has a specific resource bundle available to it, a certain amount of exposure to information, definite cultural knowledge and a unique social network. The idea of developing a group then becomes a matter of using these exogenous variables to bring significant changes in the endogenous variables and if viable alter the exogenous variables themselves to bring about sustainable changes for the same.
In India, the rural areas are under developed and lack organised systems for information transaction and even continue to suffer in the clutches of social and gender discrimination. It is but obvious from the above analysis that the rural areas have the majority of impoverished people who struggle to earn their livelihood. The social backgrounds surrounding them, makes the much practiced systems of status upliftment void.
It was initially suggested that if rural people are poor we should provide them with monetary help or subsidies in kind or wealth to give them a better chance in the world. However the widely practiced form of this assistance could not work largely due to absence of collateral and illiteracy that plagues rural India and countries similar to it.
Need is the father of invention and the need to provide financial inclusion to these rural poor saw the emergence of micro finance as a solution. Programmes were introduced to harness the innate capabilities of the poor and to complement them with capacities in the form of information, knowledge, skills, tools, finance and collectivization, so that they could participate in the growing economy of the country. Improving livelihood is a holistic development, one that would facilitate the poor to achieve increased access to their rights, entitlements and public services, diversified risks and better social indicators of empowerment. There are very few programmes that contribute to human development the way livelihood programmes do and even few which are as sustainable, which help them “live”.