Treated Bednets – Dealing with Mosquitoes: Where is the Problem? 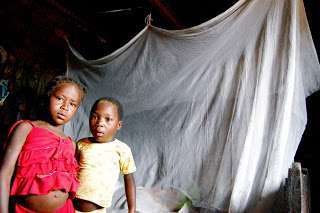 Posted by admin on October 24, 2012 | Featured | No Comments
Well, this week has been festive not just as per the Indian calendar alone, the weather in Madras has been rather pleasant with consistent rainfall. However, consistent rainfall in India does have its share of problems that it brings – No, I am not referring to the roads that require repairing (surprisingly, one might say the roads are little better off this time, still requires work) – the problem I am talking about is the mosquito menace that gets intensified with the onset of monsoon rains. The television channels are doing their bit by using film stars in making promotional campaigns as to how curb the mosquito population. Every measure counts when it comes to this problem. 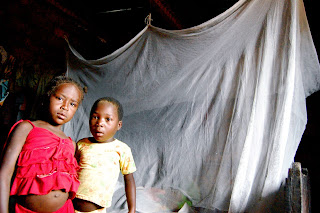 (Pic: Angolan children with a bednet in the background. Source: Wikimedia Commons)
One of CMF’s projects investigates the behaviour of people when two different schemes offering the same service/product – treated bednets meant to protect the people from mosquito related diseases. This study took place in rural Orissa, India, in a number of communities spread across a wide area in the five districts of Bargarh, Balangir, Keonjhar, Kandhamal, and Sambalpur. Orissa, one of poorest states in India, is also the most highly malaria endemic state in the country. Records from the Indian National Vector Borne Disease Control Programme show that, despite accounting for less than 4% of India’s population, Orissa accounts for 25% of annual malaria cases, 40% of P. falciparum malaria, and 30% of malaria-related deaths in the country.
The two schemes were: free distribution and nets offered via microcredit loans. The findings of this study is definitely food for thought for policymakers and academics alike.
It is too early to claim that the health of these individuals under the experiment have shown a positive impact with this intervention. What I feel is does it require a development intervention for the government authority to realize that the health of many are at stake and preventive measures need to be taken. Does a tsunami or any other natural disaster have to occur so that we can start a disaster management department? It is true – not all of us are clairvoyant and thus foresee these events. But we sure can put an effort in curbing them and letting them get the better of everyone else.
Health awareness – this is one area where the authorities and private players can work on. Using popular mediums like television or mobile phones, measures can be taken in educating the rural poor as well as urban-dwellers on how they can do small effective things to curb down the mosquito menace. Offering them microcredit loans is a good move given the fact that the MFIs have a good reach and thus a large client base. However, much thought should be put in when it comes to devising a product that would offer a WIN-WIN situation. Another conventional text-book copy loan is definitely not the answer. The financial constraints of this population segment should be carefully examined and understood, else the financial inclusion movement is not doing what it is intending to do.