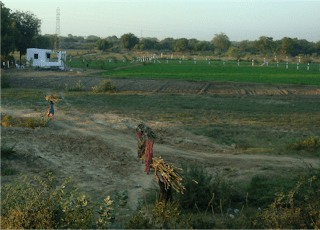 Posted by admin on July 26, 2013 | Featured | No Comments
“India lives in its villages.”
Mahatma Gandhi
After nearly sixty years, Gandhiji’s statement still holds true.  From the social, economic, and even the political perspective, India is still very much rural.

Constituting roughly 70% of India’s population, there’s an uneven distribution of basic but essential resources in rural India.  Rural India still lacks proper infrastructure, connectivity, markets, and access to quality education, sanitation, and medical services.  Through my field visits in Gujarat, I’ve learned that while there has been progress made with respect to connectivity and infrastructure, the rural are disproportionally affected during times of drought and natural disasters.

During the 2012 monsoon season, Gujarat endured one of the worst droughts in recent years.  Living in Ahmedabad, I felt largely unaffected.  I read the news about farmer suicides in Saurasthra (western Gujarat), drove past the dried out Sabarmati River, and heard the phone calls from our AO study farmers asking our agronomist about coping mechanisms and when the rains would arrive.  But my life continued – as did the lives of most urban Indians.  I realized that even though I live in a developing nation, I’m protected from certain shocks since I live in an urban center.  Unsurprisingly, the rural inhabitants are acknowledging this too and migrating – either seasonally or permanently – to the urban areas in search of this protection.  They’re searching for the same things I am: employment opportunities, better infrastructure, education, and access to markets.  But as students of development economics, we know the problems of urban migration and the laws of supply and demand.
Before working on AO, rural India was a mystery to me.  My perception came solely through books/textbooks, media, and films.  On one hand, I found myself glorifying rural India (thanks to Bollywood); on the other, I wondered how someone could truly be “happy” living a “poor” rural life – especially if they had the option to move to a city and find work.  I assumed that most in rural India dreamed to migrate to the cities.  I made many assumptions.
During my stay in Gujarat, I grappled with this question:  Is it better to live a rural life and face these potential shocks or is it better to migrate to an urban center and face the hardships of urban life and even urban poverty?  I understand that there is no correct answer to this question and it depends largely on the particular circumstance of an individual.  As we are taught in economics 101, individuals are rational thinkers and make decisions that ultimately benefit them; however, the problem arises when there is asymmetric information, which is often the case.
After working on the AO project, I’ve learned and come to appreciate rural India.  I’ve found that rural India is rich in culture and extremely welcoming.  I’ve also learned that “rural” doesn’t necessarily equate to “poor”.  Rural people are not a bunch of unhappy people struggling and trying to migrate to the urban areas.  They have deep-rooted histories and connections with the land they live on.  They live in communities, have support systems, and can trace their ancestry back to generations.  I barely know my neighbor’s name, let alone my great grandparents’ names.  The rural lead dignified and often simpler lives.
During some of my field visits to Surendranager to visit our study farmers, I was amazed to see so many televisions.  Many of our farmers are uneducated and/or illiterate (the average years of education in our sample is 4 years and 40% are illiterate); however, everyone in our sample has a cell phone (they had to for our study) and most seem to have a decent income through agriculture (an average of Rs. 10,200 per month).  While many of these farmers are not financially poor, they appear to spend money in what I, coming from an urban area in a developed country, would think is irrational.  Instead of investing in education and food, I saw people investing in entertainment – but perhaps this is what the households value more?  Perhaps it’s simply a question of taste and preferences or maybe it is a lack of education?  With televisions and access to media and entertainment, the rural population is also becoming aware about the trends in the cities and is aspiring to lead a certain life – they often glorify the city life.

I think people are forgetting that rural India has potential and this potential should not be overlooked.  Development economists and the government should look more to “ruralization”.  We constantly hear about urbanization and helping the urban poor and migrants to cope, but we rarely hear about ruralization and so-called reverse migration.  There’s a limit in the capacity of our megacities; perhaps it’s time to see how we can make rural life more lucrative.  With better resources, infrastructure, and connectivity, we’ll naturally see improved access to goods and services.  It’s time for the government to invest in rural India because India lives in its villages.