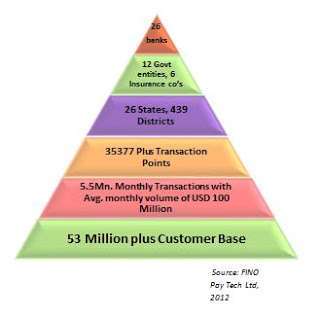 Posted by admin on December 27, 2012 | Featured | No Comments
India is a hot bed of financial exclusion. A country which houses nearly 16% of the global population  has more than 65% of its people outside the formal financial system (Global Findex 2012). The Indian banking system has adopted multiple approaches to make universal financial inclusion a reality right from early days Indian post-independence banking system. Be it bank nationalization in 1969 or formation of Regional Rural Banks. Formation of NABARD or fostering microfinance through Bank-SHG linkage programme in early 90’s. A shimmering ray hope was rekindled with the growth of JLG based microfinance, however later studies made it clear that the model is credit led, concentrated predominately in the southern region of India thus could not be seen as painting complete financial inclusion canvas. 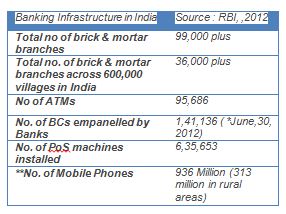 B.C – The Rockstar
In 2006, based on the recommendations of Khan Commission, the RBI advised Indian banks to make use of banking business correspondents (BC) and business facilitators (BF) to address access & service issue for all un(der)banked masses all across India. Initially only ‘not for profit’ entities were eligible to become B.Cs. However, financial inclusion being the policy agenda for the Government. The central bank went an extra mile to facilitate financial inclusion by easing many existing norms like inclusion of for profit entities to become B.Cs. RBI has played a key role in providing enabling environment for BC to flourish. To remove ambiguity, the central bank defined financial Inclusion as “the process of ensuring access to appropriate financial products and services needed by all sections of the society in general and vulnerable groups such as weaker sections and low income groups in particular at an affordable cost in a fair and transparent manner by mainstream institutional players”

Source: RBI Data 2012
The first mover in the Blue Ocean – FINO Pay Tech
The first mover in the blue ocean of financial inclusion business was FINO Pay Tech Ltd – the World’s largest banking agent manager (Slide 3 , CGAP, 2010). Formed in Mumbai in 2006 with the mission to solve problem of financial exclusion , FINO entered into the market riding on the biometric smartcard & hand held devices technology and  has ever since grown exponentially. Today it serves more than 53 million end customers all across India adding net one million (average) new customers to the formal financial system every month. FINO’s uniqueness comes from factors like diversified product offering (which ranges from savings, credit, payment services, remittances, insurance and financial literacy etc), a robust technology and dedicated channel of bandhus (banking agents) and mature processes. 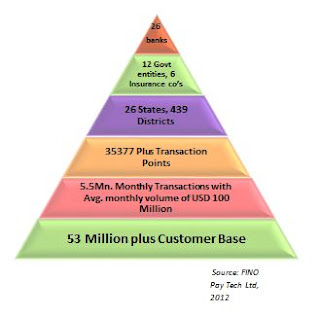 Bank-Led, Regulator facilitated model
B.C is a bank led model where a technology driven banking agent manager (or individual agents) dovetails with a prudentially regulated well capitalized financial entity (bank). A bank brings trust and robustness whereas a BC brings low cost access, technology and new tailor made products to masses at base of the pyramid and makes banking possible at their doorstep.
Today, there are 188028 villages in India (out of 600,000) connected with the mainstream banking system, over 147million basic banking accounts (previously known as No Frills accounts) have been opened and more than 74,000 habitations with a population of over 2000 are connected with formal financial system. BC’s have played a pivotal role in making this possible.
BC –  A Channel of Inclusion
Business Correspondent (BC) Model is a very powerful yet sensitive business to deal with – at least in the initial phase due to the nature of end clientele who are poor & most of them live on less than dollar a day with erratic cash-flows. Potential of the model is immense; particularly for on-boarding previously un (der) banked customers and delivery of value in electronic form.
There exists is a rich body of knowledge & experiences from existing market players, based on which the model could be replicated in other emerging countries. The key factors which play a critical role for overall sustainability of the model are:
The BC model is a successful lever of equitable growth of  society and  a meaty business for BC firms, if run cautiously. Many emerging economies (BRICS & beyond) are reaching directly to end beneficiaries through various channels and India’s DCT is latest in row . In this context, BC seems to be the most viable and natural choice for delivery of social benefits to  end beneficiaries. Today BC is probably the only bank-led branchless banking model which could be used as hardware for digitization (Cash-in, cash-out point) and for the use of e-money (transaction point) at a scale when there is very little doubt about the fate of money – which would ultimately be cashlite (digital). At last, BC model of financial inclusion in India should be seen as the rockstar model of socio-economic inclusion.