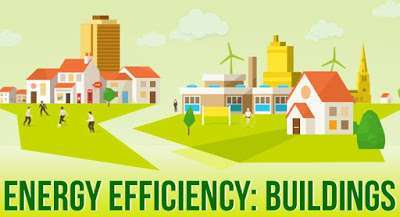 The building sector accounts for a significant share of energy consumption in India. Thus, policies that encourage energy efficiency in building construction have an important role to play in energy conservation. In this article, authors Sivaramakrishnan Balasubramanian and Gayathri Sivakumar review the policy and institutional framework for promoting energy efficiency in India’s building sector. Sivaramakrishnan is a Senior Associate with the Environment and Climate Change vertical at IFMR LEAD. Gayathri was a former Research Associate with IFMR LEAD.

The Compounded Annual Growth Rate (CAGR) for retail and commercial buildings in India, as on 2010 was estimated to expand at a rate of 9%, spurred by the intensive demand in the services sector. The rate at which building stocks are expected to escalate is around 70%, a situation that is not prevalent in developed countries (Satish Kumar, 2010). Further, it is estimated that by 2030 floor space in India is likely to see an increase of 67% (2.3 billion square meters), with the building sector expected to consume nearly 33% total energy, with an annual growth rate of 8%. (Rajan Rawal, 2012). Taking these developments into account, the Government of India enacted the Energy Conservation Act in 2001, and the Bureau of Energy Efficiency (BEE) with support from of an expert committee formulated the Energy Conservation Building Code (ECBC) in 2007 (ECBC, 2007). The code was successively adopted by the notified state governments to suit their regional and local climatic conditions. The 11 states and Union Territories included Rajasthan, Odisha, Andhra Pradesh, Telangana, Uttrakhand, West Bengal, Karnataka, Haryana, Punjab, Kerala and Union Territory (UT) of Puducherry.

The Ministry of Environment, Forests & Climate Change (MoEFCC), issued a nation-wide Environment Impact Assessment (EIA) Directive in 2006, and a recent amendment in 2016 that mandates environmental clearance for all infrastructure developments before starting any construction work, or preparation of land for project management. Under schedule 8 of the EIA directive, the mandatory provisions categorised under the hub, Building / Construction projects / Area Development projects and townships govern the regulations of the building infrastructure projects. (Forests, 2006).

EIA – Environmental Impact Assessment, SEIAA – State Environmental Impact Assessment Authority, MoEF & CC – Ministry of Environment, Forests and Climate Change, ha – hectare Table 1. EIA Notification schedule 2006 & Final amendment in 2016 for Building / Construction projects / Area development projects & Townships (Forests, 2006) The provision for mandatory inspection of buildings on completion, by accredited auditors and issue of completion certificate, only if the local authority is satisfied with the implementation of environmental conditions including provisions of ECBC, can help ensure better implementation and enforcement of the code. To sum up, for buildings which fall under category ‘B’ and require clearance from respective SEIAA, the notification calls for compliance with environmental conditions including ECBC for buildings with built-up area > 20,000 sq.m. This implies that a much larger number of buildings will need to comply with ECBC as adopted by the State concerned. Importantly, inspection by an environment auditor and certification is necessary post construction and prior to the issue of a completion certificate. Local body officials have to ensure ECBC compliance before issuance of the completion certificate since the completion certificate is a pre-requisite for the provisions of water and electricity connection.

The state of Telangana notified the ECBC through the state level gazette notification and mandated it as Telangana State Energy Conservation Building Code (TSECBC) under the Energy Conservation Act, 2001. The Code is applicable to commercial buildings and other Non-Residential buildings that have a plot area of more than 1000 sq. m or built up area of 2000 sq. m. Karnataka mandated the ECBC as Karnataka Energy Conservation Building Code (KAECBC) for all commercial buildings that have a connected load of 100 kW or greater, or a contract demand of 120 kVA or greater, or having conditioned area of 500 m2 or more. (Department of Energy, 2014) Energy efficiency targets are often regulated by the Central Government in close coordination with statutory bodies (such as Ministry of Power (MoP), Bureau of Energy Efficiency), but lack authority on enforcing and diffusing the national targets to the state context. The BEE determines the regulatory framework for code notification, and its designated agencies in each state are directed to play the facilitative role between the Centre, State and Sub-State (Urban Local Body – ULB) level. Meanwhile, the state governments carry enforcement privileges to exercise certain provisions of the Energy Conservation Act and amend the national codes such as ECBC to the state perspective, to suit regional climatic zones and functions. The inadequate synergy between the National and State Governments in conceptualising goals and lack of prioritisation to disseminate energy efficiency targets promulgate as primary hindrances for poor uptake of the ECBC implementation. The attitude of the local governments to expedite the uptake of the Code, given the shared economic and energy scenario, has not been successful. This is due to the gaps and barriers with respect to certain policy functions such as policy design, financial arrangement, administrative coordination, compliance enforcement, capacity building initiatives and multi stakeholder consensus.

Institutional set up for code implementation

Amendment of building by-laws with the ECBC code provisions adapted to the State context is regulated by the Urban Development Department (UDD) with inputs from the Town and Country Planning Organization (TCPO) and the compliance is executed by the individual Urban Local Bodies (ULB), responsible for town planning, regulation of land use and construction of buildings, roads and bridges. For unanimous state level adoption of the ECBC code and to expedite the implementation, it is more influential to incorporate the directives through its General Development Control Regulation (GDCR) that is formulated at the ULB level vary with finer and streamlined contexts more apt to the urban centre and the code can be fine-tuned, if required, at this juncture. Another intertwined paradox of failure in Code implementation across state lie in the necessity of multiple statutory bodies to monitor compliance and the lack of synergy in actual operation. Contextually, the State Designated Agency (SDA) or the State Energy Departments are the sole regulators designated to perform due diligence of the building connected loads, to meet the code requirements and the Municipal Administration Department / ULB are primary enforcing authorities to monitor compliance protocols and corresponding certificate issuance in the pre- and post-construction stages. The absence of either makes code implementation invalid.

To ensure robust, successful implementation of such a technically sound energy efficiency building Code, every state must possess the capacity to harness the skills of a cadre of professionals at every step associated with compliance, and these professionals must be employed across the regulatory bodies (either as a part of the Statutory body or as a Third Party Assessor (TPA)) and supporting institutions. However, there is a lacuna in technical know-how, which manifests itself in a number of ways. (Khosla, January 9, 2016). Skilled professionals associated with the Building Science sector are categorised across the qualification spectrum such as Architects, Engineers and Building Science graduates, who have work experience along with academic competencies to deal with absolute code requirements. Implementation of ECBC code is an absolute requirement mandated during the building approval procedure at the ULB level. Unfortunately, the technical staff of urban local bodies consists mainly of Civil Engineers who do not possess the required Building Science knowledge. The issues of poor skill development and deployment mechanisms at the state level are further compounded by a feeble and frail market for energy efficiency measures, limitations with the energy efficiency material, product testing facilities and allied infrastructure, poor and decelerated investments in the research and development of these products, and technology transfer mechanisms.

Despite a series of measures taken by the BEE to build capacity and facilitate ECBC implementation including training 60 persons under the Master training program, incorporating ECBC into the National Building Code, as well as steps taken by the respective State Governments, ECBC implementation is yet to pick up in Karnataka and Telangana. With the launch of a revised Code ‘ECBC Code 2017’ in June this year, there could further delay the process of implementation of the Code in both states, as the new aspects of the Code have to be disseminated to relevant stakeholders (Statutory bodies, TPAs and Real estate developers) through technical workshops. The TSECBC and KAECBC will need to be modified in accordance with their climatic conditions and upgraded to suit the ECBC 2017. Going forward, there is a need for stakeholders to adopt a more collaborative approach in promoting the implementation of the Code, and strengthen technical capacity for the same at the sub-national levels.
References