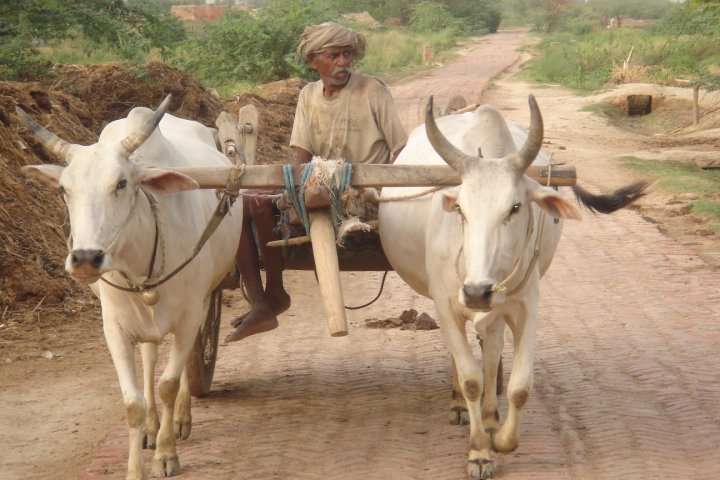 Posted by admin on November 14, 2013 | Featured | No Comments
For many of India’s 850 million rural inhabitants, 40 per cent of whom live in poverty, delivering agricultural output in a timely manner is a significant challenge. Poor infrastructure, lack of scale  economies (70 per cent of landholdings are less than one hectare, or 2.5 acres), and costly transportation means smallholders routinely sell their output to traders. However, this potentially efficient division of labour suffers from limited competition among these middlemen, who are able to exploit their bargaining power to extract a surplus. On the other hand, farmers who sell their produce directly to end consumers face difficult timing and/or locational decisions, uncertainty about prevailing market prices and an inability to visit every market every day.
CMF’s “Increasing rural incomes by expanding access to agricultural price information” in Karnataka intends to rigorously evaluate the “success or failure” of Fasal (a cell-phone based service that provides current price information on a variety of agricultural outputs at a range of markets on demand) within the context of an RCT with an encouragement design.
The study is being conducted in three districts of Karnataka. Currently, the study is in the baseline data collection stage. The sampling criteria for the selection of the villages in the district was multiple market access , so that there could be an option for the farmer to decide the harvesting and selling based on the crop prices (through Fasal). In the three districts identified for the study there are eleven major markets where the farmers sell their crops mostly. However as we sampled the villages based on the multiple market access criteria it became evident that for any village the distance between  village and the market will not be exactly same as between the alternate market. Thus, the selection of the village was to be done keeping in mind the geographical constraints and  sampling criteria. For this we used symmetry in geometrical shapes
The market networks in the selected districts are of two types
This means that the village has access to either two or three markets respectively. The market pair or triangle was selected based on the infrastructure (Road Network) facility available for the farmers from the villages to the selling markets. The distance in kilometres was an important criterion for selection of Market Pair/Area.
Mapping of the Villages
Once the selection of the districts and market networks was completed, the villages needed to be mapped. The villages being selected had to have access to a minimum of two markets within the same or the neighbouring district.
A total number of 190 villages were mapped in 12 market pairs selected across the three districts of Karnataka. The villages are not equally distributed across different districts or market pairs.
The villages were first identified on the District and Block level maps and checked in the Census list. Based on certain selection criteria the villages were selected for further sampling.  The methodology has been discussed in detail below
Plotting of Villages on District/Block Maps
Firstly the Paper Map plotting of the villages had to be done for the villages. To do so the District and Block level maps for the three districts were purchased from the Department of Settlement and Land Records from State Revenue Office of Karnataka.
1.      Market Pair network was drawn on the District Maps
2.      Two types of villages were identified
A.   Two Market Access: The connecting road between any two market pair was bisected. The Villages on the perpendicular bisector were selected
B.    Three Market Access: A circle was drawn in the triangular area between the three markets. The villages within the Circle were selected. 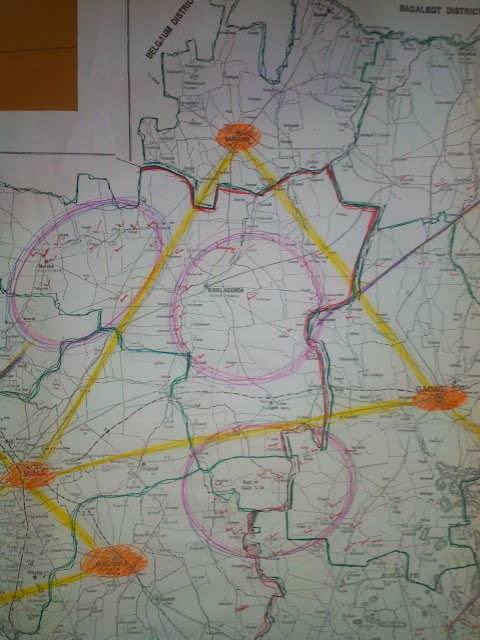 Once the village was identified on the Hard Copy of the Maps, they were tallied with the latest Census List. Only the villages which existed in the Census -2011 list were selected for further sampling. The following information were collected from the Census -2011 list for the selected villages:
Based on the above data the Outlier villages were dropped. The villages with extremely low number of Households or Cultivator populations were dropped. The villages were coded sequentially and a list of 190 villages was finalised for the baseline study. These villages were also mapped on the Google Map, creating a customized Map.
Whenever we plan to conduct a study in the remote villages, I am sure many of us come across the complicated question of successfully locating the villages where we plan to administer our survey. At times the administrative maps are also not very helpful in identifying the exact location of these villages. Also with time the government definition of the village boundaries change, which might not be reflected in the block and district maps created years before the change. To add to this the residents of the village who might not be very well aware about such recent definition change may continue to mention a different village name which can lead to mismatch of number villages in the sample. Though these are unavoidable realities some ground level planning can be done to prepare a list of the most updated village names. What is more important is the identification of the village on the maps to verify the location which may be important from  the sample selection point of view , like in the Price Information study.
The mapping is sometimes different as was observed when the field data collection actually started. The villages which seemed to be just few kilometres away (as seen on the Maps) from each other are actually separated by uneven terrain, forests or water bodies because of which the road takes a roundabout and longer route. The bigger challenge is the frequency of transport to get to these villages which are at a great distance from the main Blocks/Taluks. It will be interesting to see if the Farmers actually give up the closest and most convenient markets where they have been regularly selling and tread a road which takes them to a further but more profitable option.
Project page on CMF’s website: http://bit.ly/1kBodE6