Newsletter Article, Issue #18: Saving against all Odds – A Savings Story from the Field 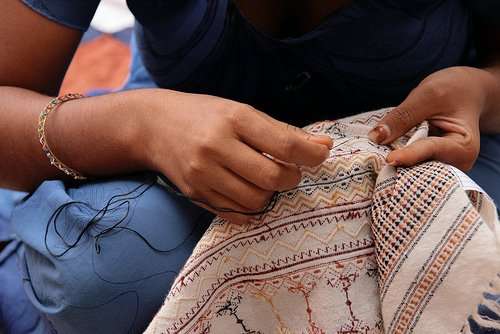 Posted by admin on January 31, 2013 | Featured | No Comments
This is the inspiring story of an ordinary housewife who rose above her position and succeeded in making her life worthwhile. Hailing from Narpatpur, Varanasi, Gita Devi was just another regular housewife whose job description included looking after her family and doing daily chores. Her family consisted of a husband, a son and a daughter and an aged father-in-law. Belonging to a lower middle class family they were not well off, financially. Her husband was the sole earning member of the family and like every average Indian household, Gita Devi was a homemaker.
She had a habit of saving money and economising on the family needs. She, tactfully loosened the purse strings and saved whatever amount she could, although more often than not, it was a meagre amount. She opened a FINO account and started depositing the family savings. This habit persisted and after a few years, she realised that she had enough money to start a small business of her own. Going through times of tough financial crises, Gita Devi decided to help increase their financial conditions. Using the saved money as the starting capital, she started a small handicrafts business of her own. She was 39 years of age when she started the business and her journey was definitely not a smooth one.
Being a woman of a lower middle class family, from a small town of India, who is expected to remain within the boundaries of her home and look after her family, Gita Devi took a brave step in going ahead and placing herself at the position of the earning member of the family. Her decision helped improve the financial conditions of her family, which is now stable. Her children can afford to earn better education and other familial needs like medicine, better hygienic conditions, etc can be taken care of. Gita Devi is an inspiration for all the women in the rural areas, who want to rise in life and be independent but are not able to do so because of the lack of motivation and willpower.
A regular practice like saving money resulted in improving the life of a whole family. In a country where sex-ratio is low and patriarchal norms are the dominant forms in society, Gita Devi’s story teaches a lesson to everyone who question the capabilities of a woman, more so, a woman of rural India. This also proves that technology’s effects are far reaching, where a simple village woman gets to know about saving accounts in institutes like FINO. It is important to be aware of such things so that the services provided by the government and other private organisations can be used profitably by people who hail from the backwards strata of society. By better means of communication, people living in the rural areas get to know more about alternative occupations other than agriculture.
The handicraft business of Gita Devi does not require her to migrate to the cities in search of jobs and in the process be away from her family. It is a job which she can administrate from her home and continue with her household chores, so that both her personal and professional lives are balanced. Apart from generating money, the business also gave her confidence in her own potentials outside of being a homemaker. It gave her a skill and a hobby she enjoys. It does not have the limitations of a curbing government job like stiff work hours and limited holidays. It gives her freedom to work as and when she likes with addition to being profitable.
Gita Devi now has her own identity. She is not known merely as her husband’s wife. The business earned her due respect and the satisfaction of getting paid for a work she devised of her own. It is a matter of pride for her family who have better living conditions. Gita Devi’s success story is that of a poor woman rising above her social conditions and proving herself to be a strong, confident businesswoman.