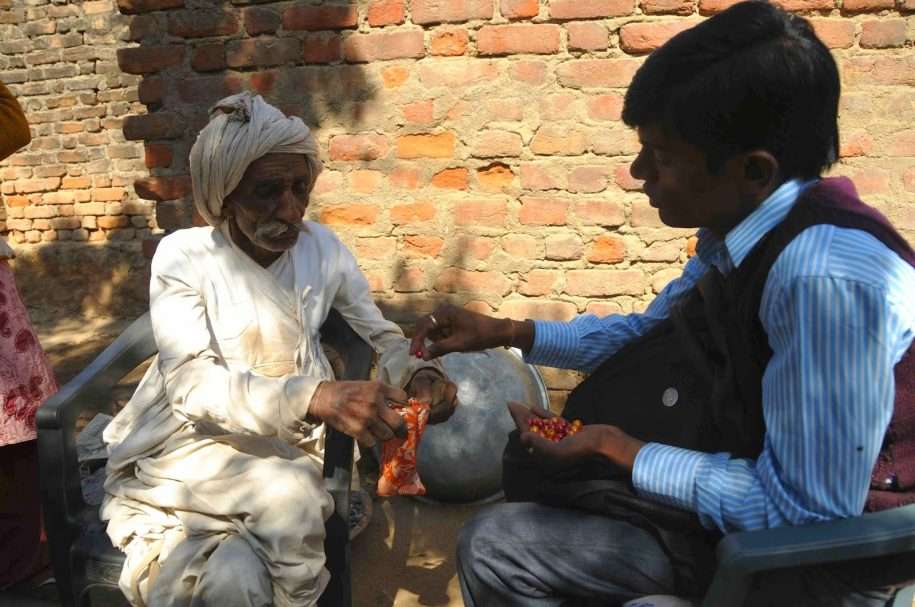 Posted by admin on October 29, 2013 | Featured | No Comments
Access to finance can have multiple effects on an individual’s life, especially on community behavior. Imagine that we had no banks, no financial services – Who would we borrow from?
The rent that informal service providers can extract from their clients is limited either by their willingness to pay, or their ability to borrow/save with other sources (outside options). In the absence of rural financial institutions, existing evidence shows that moneylenders and informal providers charge very high interest rates from their poor borrowers (60%-100% or more) and service savings at steep negative effective interest rates (Collins et al. 2009).
KGFS generally operates in areas with no competing formal institutions. Hence, in most cases, the prevailing source of financial services at the time of KGFS’s market entry are friends, family, and semi-formal lending institutions. So what happens when we introduce a new way to borrow, lend, save and insure within a community which had its own self-sustaining way of doing the same? How does this intervention affect social behavior and willingness to share within a community. This is one of the questions that the KGFS Impact evaluation aims to address.
To understand this community level effect, we need to look at the concept of social capital. I’d like you to think of the effort you put into building social networks as investing in social capital. In simpler terms, the stronger the networks you have, the higher your level of social capital. Social capital plays a very important role in joint liability group loans, where people borrow and repay as a group. If one defaults on their repayment, they not only lose the opportunity to borrow again, they lose access to the group they were a part of. Social capital is meant to act as a deterrent to default in joint liability contracts.
Previously, a few behavioral experiments have been conducted to measure the effect of change in social capital on risk sharing and hence, repayment behavior (Economic Returns of Social Interactions, Feigenberg et al.). Conversely, as a part of the ongoing study we aim to explore a key question: What is the impact of access to financial services on social capital, within a system of financial services which does not involve joint liability, and individuals maintain a one to one relationship with the financial institution?
The experiment will be conducted for about 700 households in Thanjavur, Ariyalur and Pudukkottai where KGFS operations are present. Since this is a Randomized Controlled Trial, half of them have had access to financial services since two years (the treatment group) and half of them have not had access to the same (control group). The data will give us an insight into the impact of access to finance on social behavior of an individual as well as a community.
This part of the survey delves into the behavioral economics of impact of access to finance which can always have surprising results which don’t necessarily have to conform with theory, which is what makes this experiment challenging as well as exciting.
Behavioral Game Setup:
We address this question by conducting a type of behavioral experiment with the respondent called the Dictator game. There are two types of Trust games – The Dictator Game and the Investment Game.
In the second phase of our survey, we played the investment game, but for the current phase, we are playing a slight variation of the Dictator Game. Here is a brief description of the Dictator Game-

Task A: The amount being given to player 2 will be the same amount that player 1 decides to give to them.

Task B: We double the amount that player 1 decides to give, and give that to player 2, i.e

We inform Player 1 that the money he/she allocates to Player 2 will be doubled before we give it to player 2.
For more technical details on the trust games, readers can refer to this link.

The motivation behind doubling the amount in Task B is to capture a sense of expectation of return that player 1 will have from player 2. To elaborate, if player 1 gives more, player 2 gets more and so player 1 can expect a return. There are two things to be pointed out here:

First, we do not ask player 2 to return any money to player 1, it is just an “expectation” of sharing back, that we want to capture via this game. Due to the possibility of future interaction, respondent behavior is likely to be in part motivated by reciprocity. This expectation is also called belief or trust, when we talk in terms of behavioral economics. Second, we would expect people not to expect anything back from strangers. But the point of playing this game with strangers is that we measure the general willingness to share and the “expectation” of return, that exists in the community and not just among friends/relatives.
To get the intuition behind this activity, you can make these decisions as if you’re player 1. The thoughts that influence your decisions translate into your willingness to share within your social circle. When administered to a larger population, this experiment aims to analyse the level of social capital in a society and how that changes when the respondents, in our case, residents of across districts of remote rural Tamil Nadu, have access to financial services.
As a Research Associate working on this project, I think there can be different outcomes of this study, with equally logical explanations. We can expect an increase in the willingness to share, since access to finance could potentially increase an individual’s lending capacity, and so the networks would become stronger with people being able to share more. The other expected outcome could be that we observe a decrease in willingness to share, since each individual will have more flexibility in terms of managing their finances, and with access to finance, they could become financially more independent of informal borrowing or sharing links. Any of the two effects can overplay the other, but that would depend on different factors like social structure of the village, strength of informal lending network which could be very community specific.
The results from this experiment aim to get a sense of how a community’s behavior as whole is affected when it is exposed to financial services, with a focus on willingness to share and, how each individual perceives his community’s sharing attitude. The challenge is to bridge this gap between the rural poor and access to finance in a sustainable way, unique to the rural setup, and not just extrapolate the urban financial services delivery model.