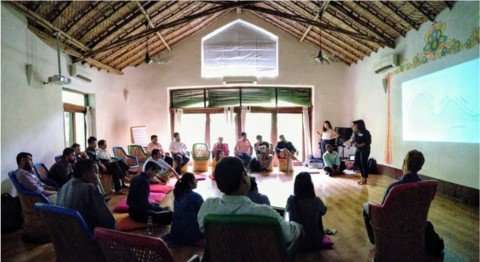 With the launch of the interoperable UPI network in India, we are at the cusp of a digital payment revolution. UPI provides users the flexibility to transact from one account to another, across banks, as opposed to closed loop mobile wallets. UPI enabled apps are a clear game changer and India’s ticket to a cashless economy. However, despite the growing variety of these payment tools, there has been a very poor uptake by the people who need them the most – the bottom 80% of pyramid. In an attempt to solve this problem and bring about a lasting payment behaviour change, Catalyst has partnered with the Government of Rajasthan to launch a UPI mass activation campaign in Jaipur. The goal is to develop a scalable template of a behaviour change campaign that can be easily replicated in other cities across India.

Catalyst and IDEO.org co-organised a round table design sprint to map out the implementation plan of the UPI mass activation campaign. pain points associated with such a behaviour change campaign. This day-long design sprint focused on using one key demographic as change agents – college students.

The attendees were grouped into 4 teams to solve the following problems:

The city-wide UPI campaign in Jaipur, is modelled on the concept of ‘Each One Teach Many (EOTM)’, with incentives designed to encourage people to help their peers download and use UPI apps. Catalyst plans to propel the EOTM mass activation campaign by focusing on the mission-driven, tech-savvy youth of Jaipur. Target ecosystems include younger merchants in market clusters, college students, high-school students, and young women in low-income residential clusters. Catalyst will run this campaign for 6 to 8 months starting in August.

The key objective of the campaign is to create a sustainable ecosystem for UPI usage by taking consumers and merchants through the following checkpoints:

Q: How might we motivate youth to adopt digital payments by tapping into their intrinsic needs and desires?

Q: How might we make transacting digitally feel more welcoming, fun and approachable?

Q: How might we demystify digital financial services to inspire greater trust and understanding?

Q: How might we empower youth to assist their local communities in the transition to digital services?

What followed was a day-long session of flaring and focusing to sift through a sea of ideas and fine-tune the ones that stood out. The teams conducted brief interviews with implementation stakeholders like college students, SEWA representatives, and Ola driver-partners. This was done to analyse the campaign from an end-user’s perspective; empathy is key to IDEO’s human-centric design philosophy. Stakeholders of Catalyst’s Jaipur mass activation campaign were present. These included NPCI, Facebook, SEWA, and Ola Cabs. In addition to implementation partners, college students from Delhi and Jaipur participated in this design sprint. To provide the perspective of merchants, driver-partners from Ola also participated in the discussion.

Each team decided on a strategy to solve their problem, a structured prototyping session was conducted to test the viability of these solutions. For instance, one team proposed making digital payments a part of the campus culture of colleges. This would involve seeding a student-led movement with appropriate incentives. To test this idea, Catalyst is going to conduct a pilot in a college in Jaipur in the coming weeks. Another solution was to create a ‘Digital Dost’ or a financial literacy digital mascot to provide real-time assistance to adopters of digital payments. A representative from Facebook proposed using chatbots to make this a scalable solution.

To identify the next course of action, the attendees identified a few synergies. NPCI saw potential to work with Catalyst to promote financial literacy and help monitor UPI adoption at the aggregate level. Facebook was optimistic that social media engagement will increase the reach of the mass activation campaign and help effectively deliver messaging. Organisations like SEWA and Ola Cabs, with an existing footprint in Jaipur, expressed their support to promote the digital payments mission through this campaign.