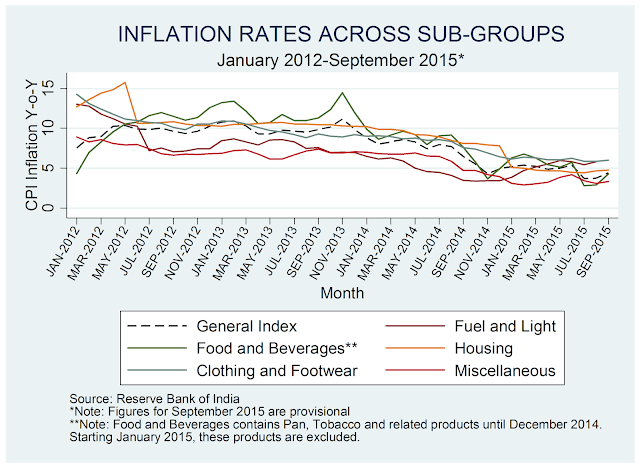 Posted by admin on November 30, 2015 | Featured | No Comments
These are times when Central Bankers across advanced economies are finding it difficult to avoid polarization of opinion on the merits of their policy paths.  The Reserve Bank of India (RBI)’s Governor though has received an almost unequivocal endorsement from both domestic (with some exceptions) and international stakeholders on the bitter medicine he has prescribed to control India’s inflation problem. Notwithstanding charges that his tough position has dampened economic activity, Dr. Rajan has stuck to the orthodox stance of Central Banks being primarily responsible for maintaining price stability.Inflation’s Downward Path
Among the RBI’s major achievements over the last two years is the moderation in India’s retail inflation rate. Numbers suggest that despite short-term volatility, inflation data points across all the constituent sub-groups, viz. Food and Beverages (and tobacco), Fuel and Light, Housing, Clothing and Footwear, and other Miscellaneous items point towards a downward secular trend (See Figure 1). This welcome development has been attributed to three major causes: decline in international commodity prices, a favorable base effect (which has already started waning) and the RBI’s tight monetary policy. This augurs well for the RBI’s inflation target of 6% by January 2016, and an inflation rate in the range of 2-6% (preferably 4%) there on.

And yet, a worrisome trend persists. The RBI’s quarterly inflation expectations survey suggests that while the inflation arithmetic may look pleasant, the perception battle is far from over.

Data collected from 4,903 respondents suggests that though the overall inflation rate numbers for the months of July and August 2015 were among the lowest over the last 20 months, inflation expectations-as reported on September 29- have risen to a one-year high for both pools of respondents: females and males. While year-on-year CPI (Consumer Price Index) inflation rates during the quarter ending September 2015 were in the sub-5% territory for all the three months, the average expected inflation rate reported during this period for the upcoming one-year period is 11.3% and 10.9% among females and males respectively. This should not be surprising, for consumers were hit by another tear-inducing “onion” price tantrum during this quarter. One should expect a repeat of this phenomenon during the next round of survey, when the effect of soaring “dal” and tomato prices kicks in.A Self-Fulfilling Prophecy?Short-term volatility in food and fuel prices is an accepted phenomenon internationally. Policymakers, thus, prefer core inflation- retail inflation excluding food and fuel prices- as a more reliable benchmark that might guide future policy decisions. Nevertheless, inflation expectations may not be as sophisticated. The average consumer does not ignore sharp hikes in food and fuel prices in the short-run with the same astuteness as an economist. The danger lies in the fact that such expectations, in turn, may prove to be self-fulfilling prophecies. High inflation expectations lead to higher inflation in the future. This mechanism operates through several transmission channels, with present day contract negotiations-which are fuelled by high inflation expectations- being among the major sources of “cost-push” inflation in the future.Ball in Governments’ CourtTo be clear, the RBI has done all it could do with its policy toolkit. By keeping short-term interest rates tight for a long time, it has almost killed demand-side inflation. It is only ironic then that Dr. Rajan & Co. still find themselves helpless in this scenario. On the one hand, the RBI has received criticism for its orthodox obduracy in tackling inflation; the Governor has been forced to brave it out in the face of criticism from several stakeholders. On the other hand, re-emergence of inflationary trends due to inaction on the executive and legislative fronts will hurt the RBI’s credibility in the long-run, while also derailing plans of maintaining inflation within a band of comfort.To the contrary, policymakers across Central and State Governments find themselves in an enviable position. Apart from the RBI’s efforts, they are currently enjoying the comfort of a dream run resulting from plummeting international commodity prices. With none of these extraneo us factors spoiling its party, the expectation that the Government should better manage price stability is not very ambitious. Apart from the above mentioned example of food prices, sectors such as education and healthcare have been characterized by escalating prices, an issue raised by Dr. Rajan in September. Concerted efforts by both the Central and State Governments now hold the key for price stability in the long-run as well as upholding the RBI’s credibility.