Child Care: Whose Responsibility is it? 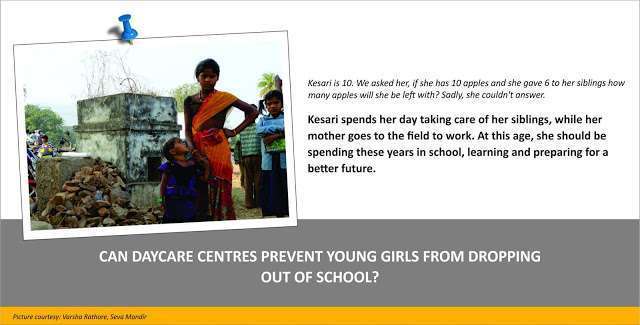 How many of us had our fathers waking us up to get us ready for school, cooking meals for us, attending parent teacher meetings, and being home when we returned from school? – I didn’t. And the majority of the people around me did not. In most parts of the world, childcare responsibility primarily falls on the women, and this is especially true in the case of India.

In the recent times, much has been said about women sharing the larger burden of household and childcare responsibilities. From Indra Nooyi (CEO of PepsiCo), who said “Women can’t have it all” to Sheryl Sandberg’s (COO of Facebook) book Lean In – they all talk about the undue share of these responsibilities that women have to take and how it adversely impacts their participation in the labor market.

In India, female labor force participation has been on a decline even though there has been an overall rise in economic growth. According to the ILO’s Global Employment Trends 2013 report, between 2004-05 and 2009-10, female labor force participation rate has fallen from 37 to 29 per cent. Socio-cultural factors like the patriarchal nature of Indian society, discriminatory practices against women at workplace etc. have been and are still, contributing to this trend. However, there are other factors which can be attributed particularly to this trend of declining female labor force participation. One of these is household income. As household incomes are increasing, the pressure on women to work is less, and it also becomes a prestige issue. In order to maintain the family status, women stay at home (Bhalla & Kaur, 2011; Mahapatro, 2013). Childcare is one of the factors which has played and still plays a major role in this trend but has not received much limelight in the policy space.

If we consider childcare as one of the primary hindrances to women’s participation in the labor force, then what are the possible ways to overcome this challenge? One could think of some possible solutions based on experiences of other countries as well as the recent trends in India. For instance, countries like Sweden and Norway offer more than a year of paid maternity/paternity leave for each child. Many companies offer the option of work-from-home and flexible work timings. Recently, in India, Flipkart introduced a range of policies to support new parents in their childcare responsibilities. These included six months of paid maternity leave, transport reimbursements for the two months prior to the maternity break, and sharing of day care costs till the child is four years old. One could also enroll their child in one of the numerous private crèches or day care centers that have come up. There is also an option of hiring a full-time nanny.

Although, all these are positive developments that would enable women to be part of the labor force, they seem to be geared towards women employed in skilled jobs. What happens when a women is working on a road construction site? Can she work from home? Can she have flexible work timings? What happens when a women gets her earnings on a daily basis? Can she get six months of paid maternity leave? The answer to all these is a “No”. Also, these women cannot afford to pay for private day care services or a nanny.

So, the question remains – What can low income households do to manage their childcare responsibilities? One thing that comes to mind is the government’s ICDS program. One of the services under the ICDS scheme is pre-school and non-formal education for children in the 3-6 years age group, provided through anganwadis. Although this is a great intervention by the government and includes a number of other services for children in the 0-6 year age group and mothers, the ground reality is far from promising. As my experience in Udaipur goes, the anganwadis are located at the village level, and are usually close to a major road or highway. This makes it difficult for households in the interior and remote hamlets to access it. Also, in a majority of the villages the services in the anganwadi seem to be limited to distributing food, and at few locations it runs as a pre-school for about 3-4 hours per day.  This is not sufficient for parents who work atleast 8 hours a day.

Given these problems with the anganwadis and the absence of any other formal child care arrangement, low income households resort to a number of methods like leaving their young children alone at home, making elder children stay at home to take care of the small children, taking the children with them to work where they will be unsupervised or not work at all. Given that low income households are more in need of financial resources, they have no option but to resort to these measures. However, these measures are not safe for the children, adversely impact the elder siblings, and restrict women from being employed. Due to a gross lack of evidence on this topic, especially in India, we need to start thinking of ways in which we can encourage women’s participation in the labor force, and at the same time provide a safe environment for their children, who belong to low income households. 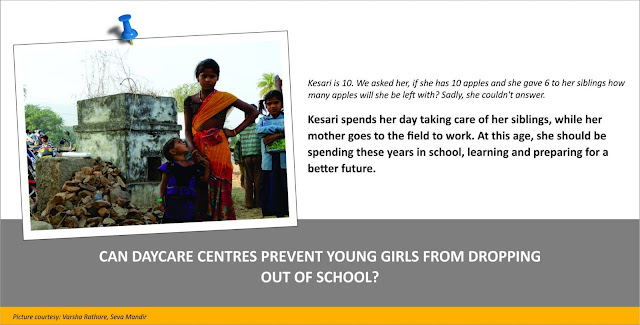 Evidence from other parts of the world

Studies in other parts of the world show that child care provisions have a positive impact on the women, children as well as the household. A study in the low income neighborhoods of Rio de Janeiro, Brazil found that the provision of free day care services increased mother’s employment from 36 to 46 per cent and almost doubles the employment of mothers who were not working before (Paes de Barros, Olinto,  Lunde, & Cavalho, 2011). Another study in Guatemala evaluated a government sponsored day care service program for poor families. This program required mothers to be working outside the home, and was run by a woman from the community. The program also had a significant impact on the labor market outcomes for women. It enabled mothers of these children to be engaged in employment in the formal sector, and their earnings were also higher, as compared to women who used any other child care arrangements (Ruel & Quisumbing, 2006). A study in Argentina, which assessed the impact of the provision of free pre-primary school facilities found that that if there is full take up of the program, the maternal labor force participation rates would increase in the range of 7 to 14 percentage points (Berlinski & Galiani, 2005).

Given the scarce evidence on the type of childcare arrangement that works best in different settings within India, and how the same impacts mothers and their children, there is a need to engage in rigorous evaluations of these different childcare arrangements. With this objective, IFMR LEAD in collaboration with McGill University, IDRC, and Seva Mandir have been engaging in a study to evaluate the impact of affordable community day care centers on women’s labor force participation, women’s social and economic well-being as well as the health of children, in India. As part of this study, we are evaluating a community day care model called balwadis, run by a local NGO, Seva Mandir in the villages of Udaipur district. Through this project, we aim to generate evidence on the impact of day care centres on women’s participation in the labor market and the well-being of their children. We hope the findings from this study could be used effectively to influence government programs and policy decisions on child care.

Project Page: Affordable Day Care to empower Indian Women
Stories from the field: How Parents in Rural India are dealing with Childcare?

Berlinski, S., & Galiani, S. (2005). The Effect of a Large Expansion of Pre-primary School Facilities on Preschool Attendance and Maternal Employment. The Institute for Fiscal Studies, WP04 (30)

Anoushaka Chandrashekar is a Senior Research Associate with IFMR LEAD. The primary project she works on is an impact evaluation study on the impact of day care centers on the health and economic well-being of women in rural Rajasthan. She is involved at the field level in supervising the data collection and monitoring activities, as well as data analysis and other aspects of the research project. She holds a Bachelor’s in Social Work from the University of Texas at Austin, and a B.A. in Economics from Shri Ram College of Commerce, Delhi University.