Posted by admin on April 28, 2014 | Featured | No Comments
Although this view is rapidly changing, qualitative research sometimes carries a reputation of being a less reliable or trustworthy approach than say, econometrics. More often than not, this stems from a belief that qualitative research is fundamentally subjective and therefore prone to bias. For some reason which I’m not adequately trained to explain or justify, the human psyche seems to have a tendency to interpret numbers as being more precise, reliable and objective than, let’s say, words. I’d like to explore the role of qualitative research and its potential for rigor in more detail. But first, I think it’s necessary to consider what qualitative research actually means.

But, really, what is qualitative research?

The answer to this question may be less obvious than it seems. We tend to think of qualitative research as being data collection and analysis associated with interviews, focus groups, observation and ethnography; while quantitative research gets grouped with surveys and administrative data analysis. This is an easy enough distinction to make, but is admittedly a little vague and simplistic. When one tries to create a more specific definition, the answer becomes more elusive.

In its most basic form, research is simply the process of gathering information and then using that information to make conclusions. The more reliable and accurate the information and the more objective and certain the conclusions, the more rigorous the research is considered to be. Fundamentally, data is simply information that researchers use to answer questions – this information can come from many different sources and present itself in numerous forms. An analytical technique or design approach is how researchers use that information to draw conclusions. We can classify research as either quantitative or qualitative by the source or form of data that it uses and the research design/analytical approach. But, often, the distinction is not entirely obvious.

Defining data as qualitative is fairly straight-forward – essentially, qualitative data is anything that does not exist in numerical form in its raw state. Most commonly in research, qualitative data takes the form of words, but it can also be images, sounds, events or any other form that serves as a potential source of information. Qualitative data can be obtained from interviews, which we typically think of as providing data in the form of words. But interviews can also be video-taped and the information available can include body position, tone of voice, pauses between conversations, laughter, sounds that are made or gestures. In some cases, these types of information can be useful – or even central – to answering a research question. Similarly, qualitative data can be abstracted from photographs, court transcripts, emails, written documents like diaries or medical case notes, blog posts, film, advertisements and any other of the numerous sources of recorded or recordable information that exist in the modern world.
Taken quite strictly, the vast majority of data is in fact qualitative in its purest form, except data which conveys information about quantity – e.g. frequency or counts, monetary figures, time elapse, size or dimension, etc. Yet, we often define quantitative data more broadly than this. 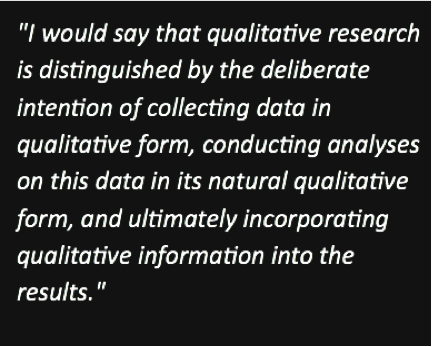 Data is typically considered to be quantitative if it exists in a dataset in numerical form, but most of the time, we are actually forcing qualitative data to take on a numeric form. This is most obvious in Likert-scale type questions, which assign numerical values to various states of satisfaction or other qualitative (and usually subjective) measures. But other types of survey questions frequently assign numbers, sometimes fairly meaningless numbers, to qualitative responses that get stored as numerals in the raw dataset. For example, we might want to know about categories of loan type that a household has taken or the type of health care professional from whom an individual usually seeks care. Often, these categories are arbitrarily assigned a numeric value and stored as such in the raw dataset. Then we have ordinal data, which is typically used to express order or ranking – information that is best conveyed numerically, yet isn’t quite describing a quantity either.