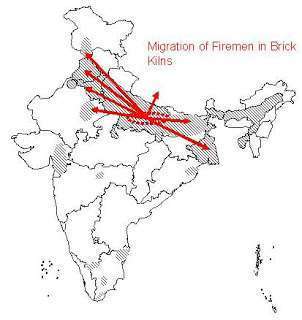 Posted by admin on August 1, 2013 | Featured | No Comments
According to the Journal of Environment Research and Development,The  Indian Brick Industry is the second largest after China. The industry has both an organized and unorganized segment in the country and it provides employment to nearly 12 million people in different sub-occupations who are mostly migrants from rural areas.
A brick – the basic building block in almost all the infrastructure we see around us, has a lot more in the making than we know. Firstly it’s more than just a piece of clay which is dried and baked and uses input material varying from Husk, Sand, Salt etc. The diversity in the sector is  very intriguing. It varies not only in the type and methods and the inputs used for production but also the type of labour that is employed in the industry. The migration of the labour happens based on the varied skill set required in the brick making:
Brick making requires skilled labour at various stages of the process. Brick burning can be done in the following types of kilns:
Each of the technologies used for burning the bricks brings about a lot of variation in the quality and annual production volume of the bricks. Also from the environmental from point of view, the technology used for burning is very important as it decides the volume of harmful gasses that get emitted in the process of brick making. The workers in the Brick Industry have to work in extreme working conditions and an unhealthy environment. They are exposed to hazardous input particles which lead to a lot of respiratory problems which can sometimes last over their lifetime.
Bricks Study: Understanding Competition and Growth in India’s Construction Brick Industry, at IFMR Research, is being conducted in the three Indian states of  Karnataka, Madhya Pradesh and Uttar Pradesh.

Presently, we’re conducting quality tests on these Bricks. These tests not only require a lot of precision in the process, but also observation.

There are two types of bricks quality tests which are being under taken:
Compression Tests: This is meant to measure the value of the Uniaxial compressive stress which the brick can withstand before it breaks completely. The manually operated Compression testing machine below is being used to conduct the same.
Absorption Tests: Bricks have pores. Due to the capillarity action of these pores, the bricks absorb the water from the mortar laid on the bricks. This in turn affects the bonding of mortar between the bricks.  In this test, we bake the brick sample at a very high temp ( 105° ± 5° C.) and note the weight of the sample. After this, the brick is submerged for 24 hours and its increased weight is observed. The increase in weight per unit original weight reflects the absorption capacity of the brick. 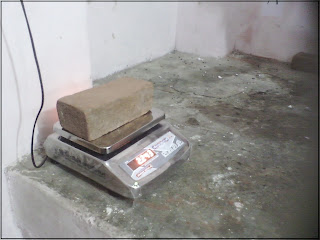 These quality tests are going to form the basis for the intervention in the upcoming RCT for the study. For this round there might be support extended to the Brick Kilns in the following terms:
Once either of these interventions is provided, it will be interesting to observe the change in the production cycle and capacity of these Kilns. With better access to credit and technology, the smaller firms can also improve their method and size of output and become an important and labour friendly source of employment and hence contribute to greater social welfare.