Analyzing the BC Model (Part II) Why isn’t it Working? – Dormancy of No-Frills Accounts 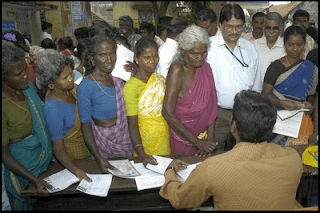 Posted by admin on October 29, 2012 | Featured | No Comments
[Terminology Used: Agents or Customer Service Points (CSPs) – Individuals, shops or other outlet points responsible for direct contact with clients. They open bank accounts, check Know Your Customer (KYC) requirements, carry out money transfers and transactions and in some cases, extend credit by linking the client to the base branch]


In our previous post, we discussed the general advantages of banks using Information and Communication Technology based business correspondents to fulfil the financial inclusion goals of the RBI. Yet, the model hasn’t been performing up to expectations so far and major concerns have been raised with respect to its financial sustainability for CSPs. Some major issues that have come up so far include:


(i) Dormancy in No-Frills accounts
(ii) An asymmetry between agent/client needs, and operational procedures of BCs and Banks
(iii) Issues over the financial viability of the model itself.


In this post, we’ll discuss the reasons for low usage patterns of No-Frills accounts.


Around 20% or less of the 100 million NFAs opened so far have been deemed as active. According to the agents in the sample for an upcoming CMF study, around 41% of the clients with NFAs transacted ‘at least’ once in 3 months, with the remainder transacting more infrequently or not at all.


A primary reason for this dormancy could be the supply driven approach of account opening drives where banks have focused on simply fulfilling their financial inclusion requirements.


In the sample for CMF’s study, 70% of NFAs opened belonged to people who already had a primary bank account. This opposes the entire purpose of these financial inclusion drives. However, with respect to account usage, the same research study found that people who have both a standard bank account and an NFA tend to use their NFA more often due to its convenience.


Then what seems to be the problem? Reported operational issues include a processing time of 2-3 months for new accounts, by which time the users lose interest and the accounts become inactive while the focus on simply fulfilling RBI’s financial inclusion requirements has resulted in banks overlooking the need for imparting financial education to clients.


Banks have also done very little to actively promote the use of the NFAs by customers and BCs which initially focused on marketing have stopped doing so due to high promotion costs which are not financially viable. A study conducted by Microsave demonstrated that most financially excluded target customers opened NFAs simply to receive wages under the National Rural Employment Guarantee Act (NREGA). These accounts exhibit more transaction activity and increase the banks cash reserves. Yet, in the absence of financial education, account holders simply withdraw the entire amount as soon as they receive these payments.


Research on NFA costs estimate that banks tend to lose money on these accounts due to low transaction activity and balances, which could explain their reluctance in investing in awareness campaigns. However, this could result in a negative feedback-loop as the continuing unawareness of clients with respect to the uses of NFAs could simply reinforce these losses.


A CMF survey found that not only were most NFA clients unaware of the uses of NFAs, they were unaware of the limits on transaction volumes as well. There are reports of cases where, due to lack of awareness about the account and its usability, clients are unable to provide account details to access their insurance reimbursement.


Clients have also expressed dissatisfaction at the fact that some banks do not provide ATM cards or cheque books along with the accounts, restricting the use of their NFAs to just BC outlets. They also desire a regular account as the tag of ‘No-Frills’ has become synonymous with poverty. In an effort to fix some of these issues, the RBI issued a request to banks this month to drop the ‘no-frills’ tag and rename these zero balance accounts as ‘basic savings’ accounts and provide ATM-cum-debit cards without any extra charge.


In the next post in this series, we will talk about the second reason for the disappointing performance of the BC model – a mismatch between agent/client needs and bank regulations.