A Conversation on Development with Kaushik Basu – Part 2 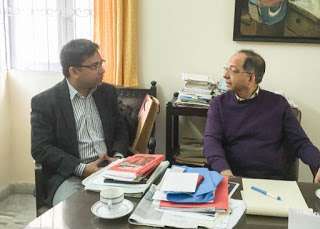 Posted by admin on February 4, 2016 | Featured | No Comments
Parikshit Ghosh (Associate Professor of Economics, Delhi School of Economics) speaks with Kaushik Basu (Chief Economist and Senior Vice President, World Bank and former Chief Economic Adviser, Government of India) on issues ranging from the use of economic knowledge in policy decisions, role of values in public service delivery, to the need for pluralism and tolerance for economic growth, and the importance of communicating good ideas effectively to policymakers and the general public. This interview is part of I4I Conversations series by Ideas for India.

Parikshit Ghosh (PG): The Planning Commission, the renamed NITI Aayog, is perhaps going through a bit of an identity crisis. It was largely a body to channel resources, to plan investments and so on. One of the new roles being talked about is maybe an advisory or consultancy role. Is it right to infer that the World Bank is also moving in the same direction?
Kaushik Basu (KB): The World Bank has been doing that for a long time. We combine lending with knowledge and advisory activity. I feel that is going to be even more prominent once the New Development Bank and Asian Infrastructure Investment Bank (AIIB) come into existence. They will very easily cut into the lending activity, but the World Bank will continue to have its strength in knowledge and advisory capability. When I was Chief Economic Adviser in India, I wanted to know the details about the conditional cash transfers in Brazil and other Latin American countries where there has been a lot of success. The easiest way to do this was to call up the World Bank office and ask for it because it had ready research material on this.

People who are not in the knowledge business very often do not realise the importance of this kind of information. I would like the government to understand that the economy is extremely complex. Economists do not understand masses of it, but they understand little bits, and you must make use of that. One very good example from India is the 3G spectrum auction. In the Ministry of Finance, with others, we estimated that the spectrum is going to be worth a certain number of billion dollars. But I kept arguing that we should get an auction going to discover its value more effectively. Luckily, the Government of India did a very good auction and what was earned was three times what we had, sitting in the Ministry, estimated. So if we had sold it on the market, we would have given it up at a throwaway price, because we did not understand the value. Auction in economics is a bit like an engineering skill. It is very difficult for a politician to understand that a well-designed auction is like a well-designed bridge. Yes, this is the sort of thing the World Bank tries to be more and more engaged with. PG: You talked about the importance of good ideas and policy design. In the last election, governance was a big word. The Prime Minister has at some points made statements to imply that it is not so important what exactly government does but that it’s done well. What do you think of this philosophy that instead of novel ideas or policy innovations, what is important is to have an energetic government that actually goes out and does things? Is this stress on governance a bit excessive and is policy being undermined in the current thinking?

KB: I feel there is a lot to be said in favour of the point that the present government is making. Just being more effective is extremely important. You want to carry out things as efficiently as possible, as quickly as possible, with as little corruption as possible.